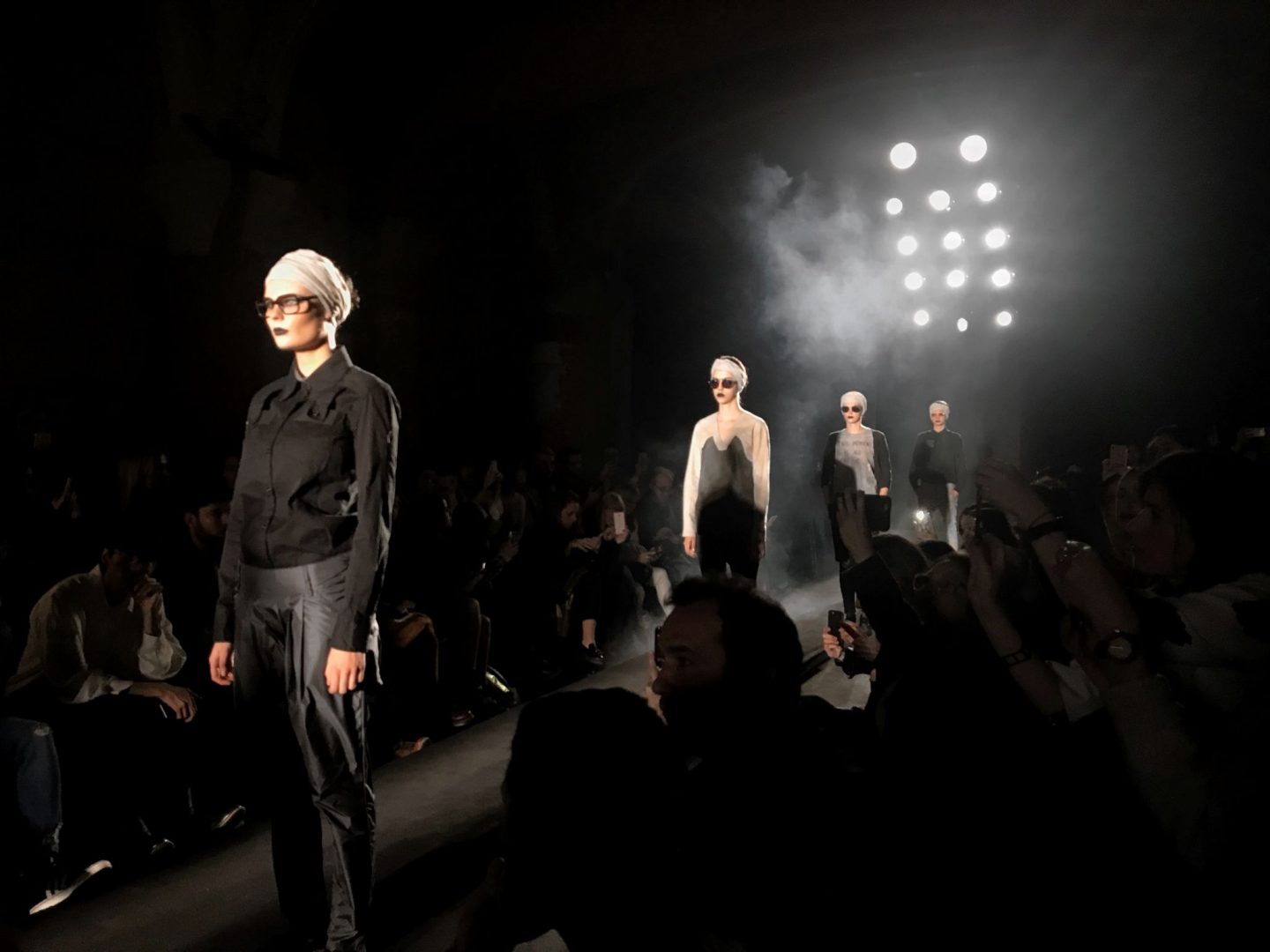 Last year I managed to attend two shows at 080 Barcelona Fashion. It was my first time at a fashion show so I didn’t really know what to expect. I enjoyed it a lot anyway and I could not wait to go to some other shows in the future. To be honest, my aim was to go to LFWM this January, but it was impossible for me to make it happen. However, I did manage to get some tickets for 080 Barcelona Fashion again.

This time I knew which fashion shows I wanted to attend. Unfortunately, I could not go to all of them because of my job. In my opinion, 080 Barcelona Fashion is not given much attention globally, although there are quite a few interesting collections. For this reason, I though it could be a good idea to show you all my favourite shows from this season.

I would’ve loved to go to this show because I thought it was going to be very interesting, but I couldn’t. It is the show that everyone talked about this season, basically because some influencers walked for them. Among them you could find people like Marta Riumbau, Dulceida or Laura Escanes. To be honest, this was an innovation at 080 but it is something that we have already seen at other fashion weeks with Dolce & Gabbana for example. I have to say that I normally like Ze García’s dresses, but I was not massively surprised by the ones they presented this year. 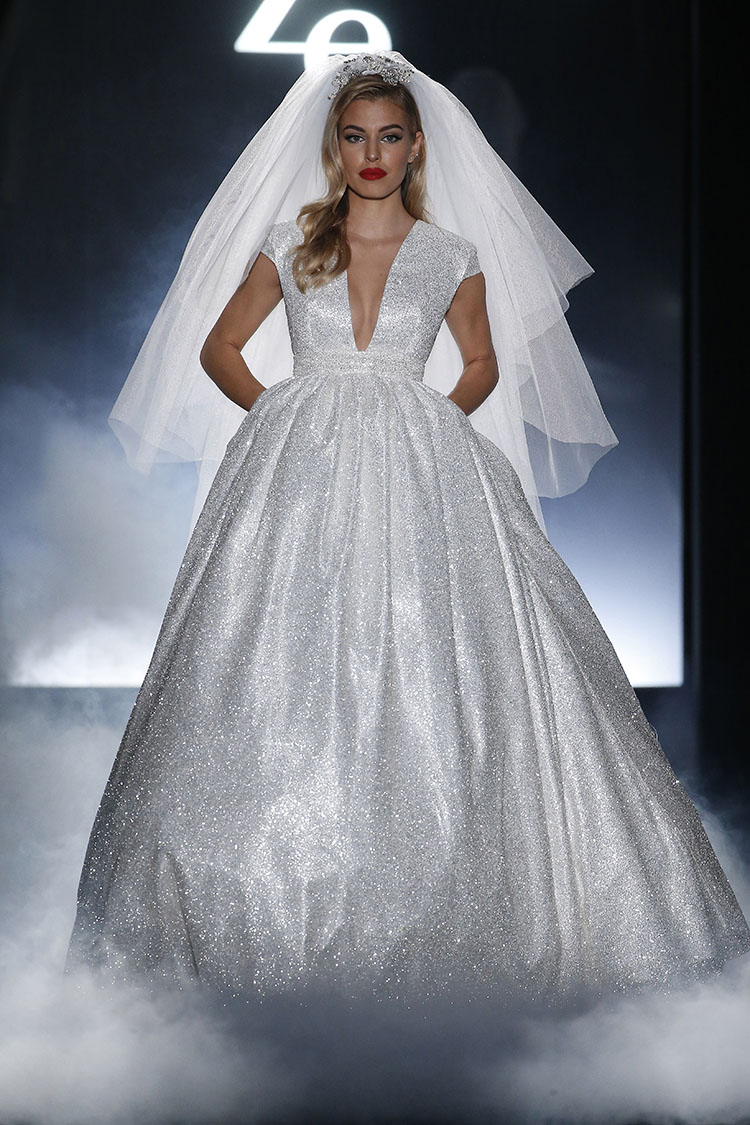 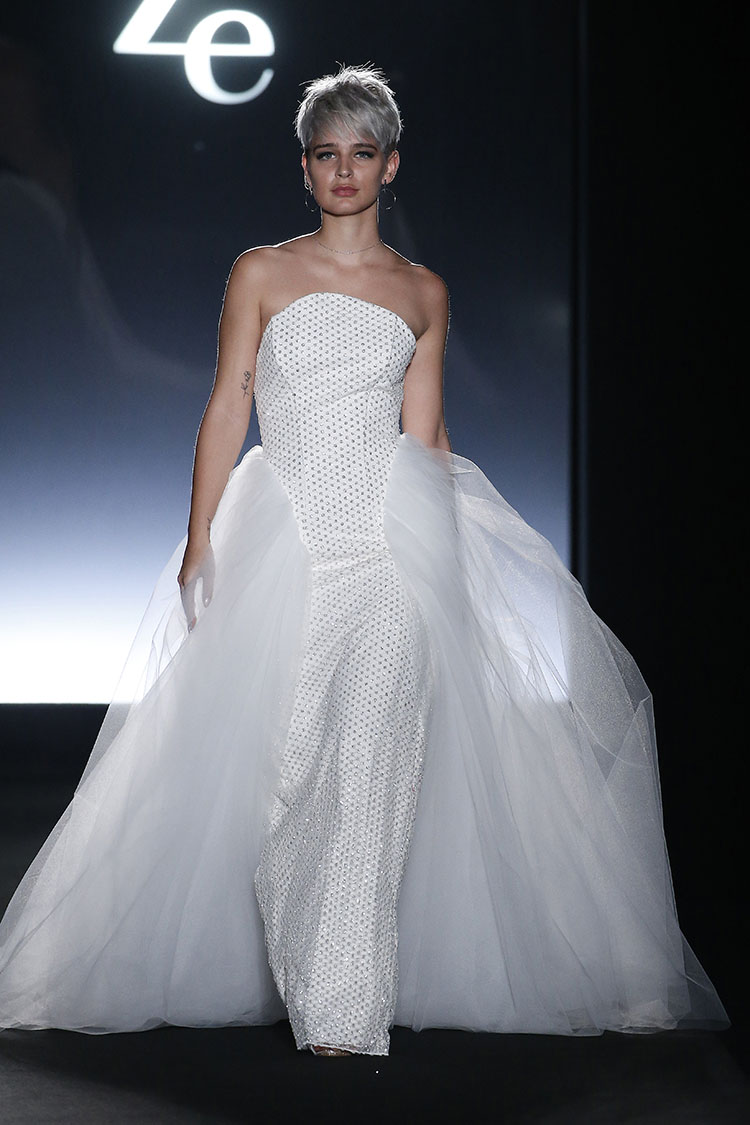 This is the first show I went to this season and my favourite one as well. I discovered about Jnorig recently, but I think their designs are very fresh and very minimal. In fact, I would definitely wear some of the pieces I saw on their runway such as the grey jacket in the first picture below. The designer, Javier Giron, named the collection Un Caracal Blanc. It is basically inspired by a mixture of two different cultures: the north west of Canada, which is very cold, and the Arabian desert, which is much warmer. What I love the most is how minimal the pieces look and also how strong the geometric figures are. The whole collection has a very futuristic vibe in my opinion, but we can see where the designer got his inspiration from. 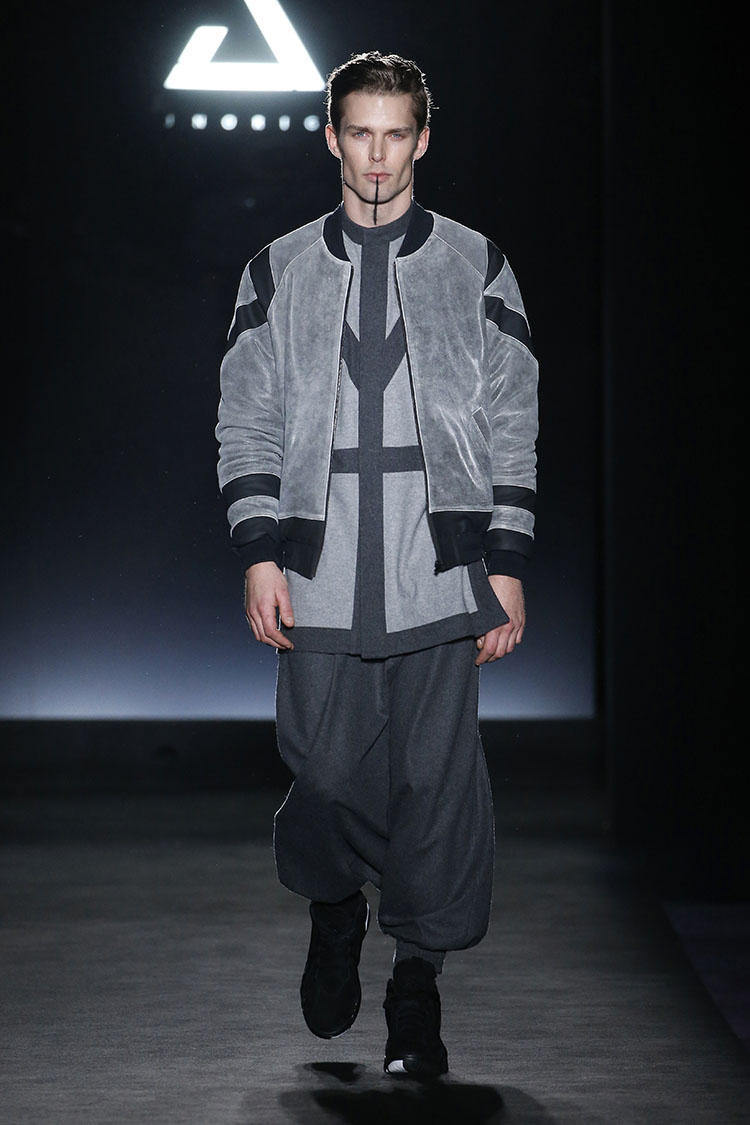 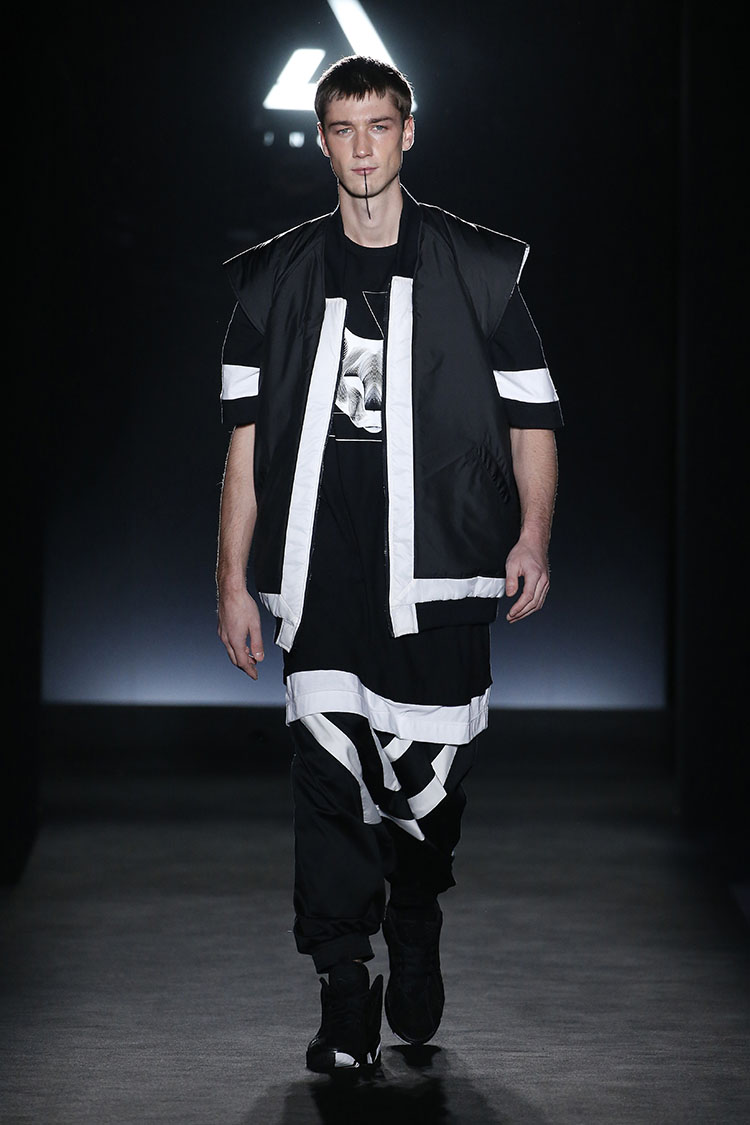 This is another show I attended. To be honest, I knew nothing about this brand but I thought it had an interesting approach. Their collection’s title is Make America Great Again!, which is obviously making reference to Donald Trump’s slogan. I can’t say I am the biggest fan of their clothing, although I do think the whole collection was exciting. It was inspired by school uniforms from New York. We all probably have a very strong image of this kind of uniforms in our minds. This is why they tried to make it new. I loved the way they played with proportions and how they integrated trends such as oversized clothing or scarfs. 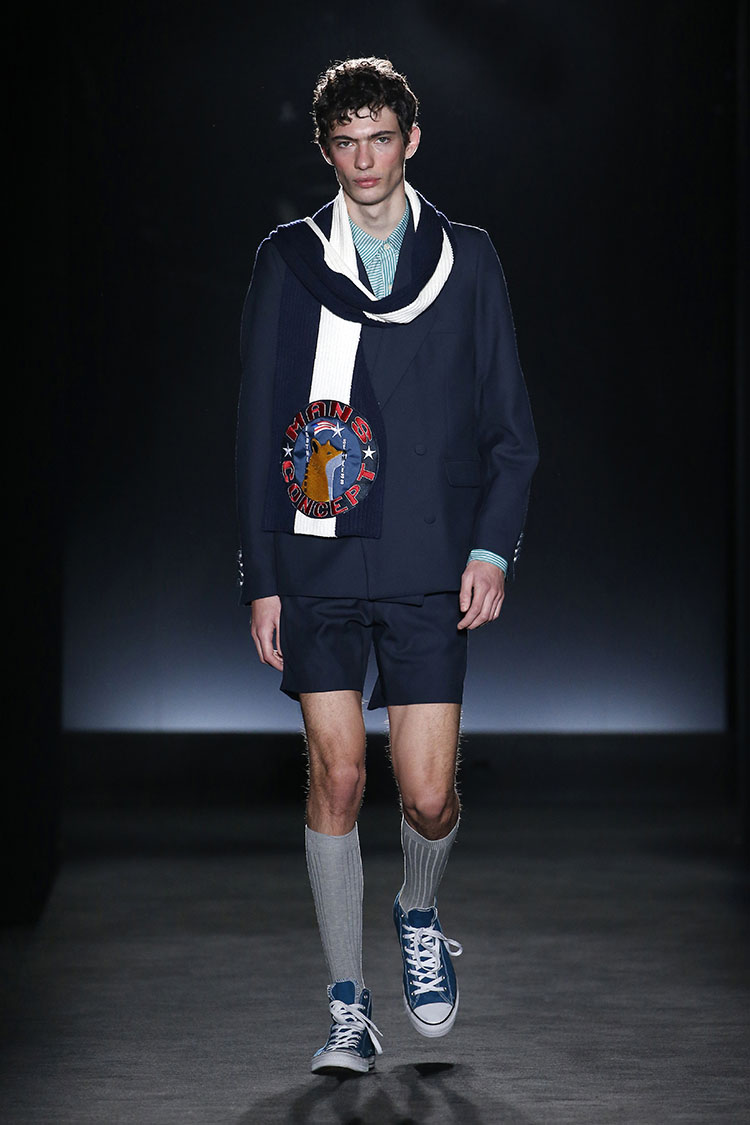 I have been following this designer for a while, and I was very curious about what he was going to present. For this reason, I was excited to go to his show. Even though I enjoyed it, it was not one of my favourite shows. The thing is that Oscar Leon has a very strong branding. This is extremely good because we can recognise his work easily, but I think it also makes it difficult for him to surprise the audience. Despite that, I always like the messages he writes on his clothing and the overall vibe the presentation has. 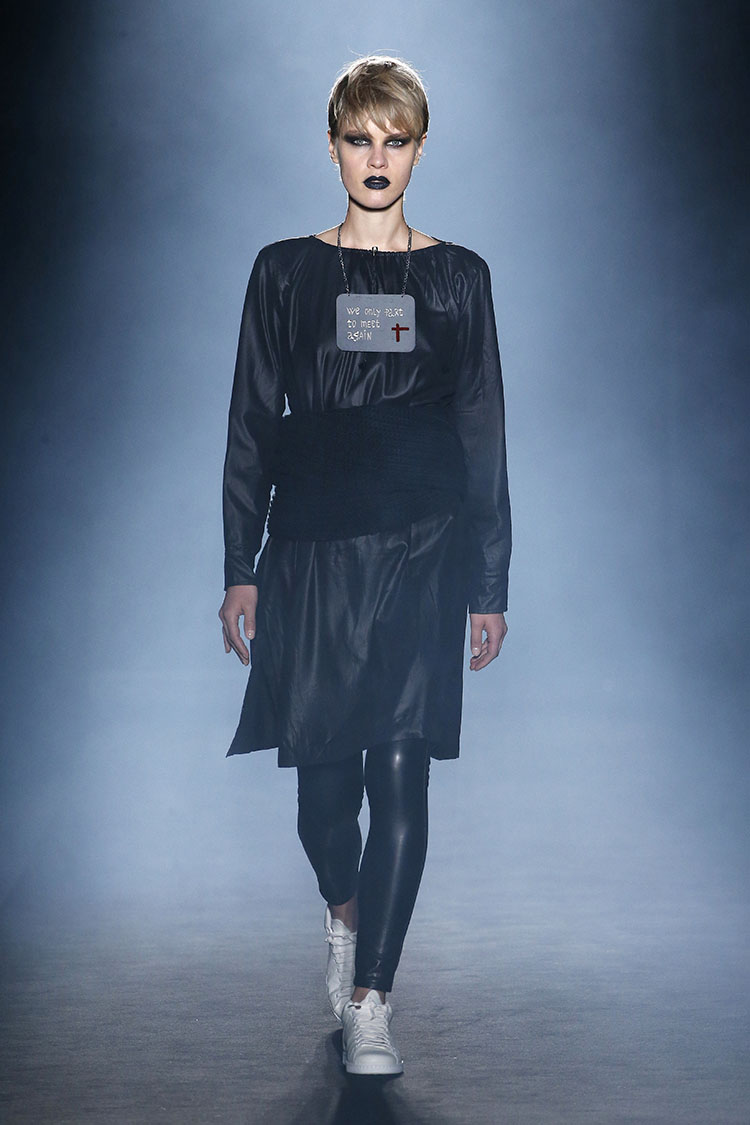 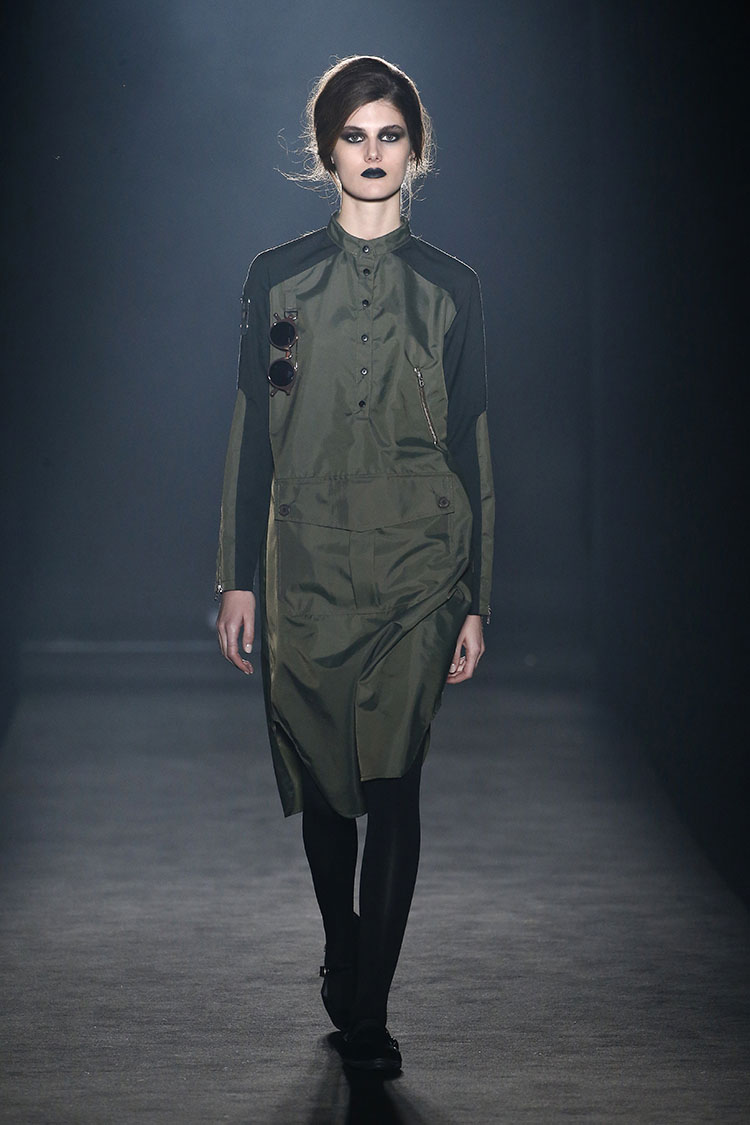 I really wish I had been able to go to Krizia’s show because last season’s was amazing, as I had so much fun. Her new collection Trendy Flock is completely different and very surprising. It is definitely not the kind of clothing that I would normally wear, mainly because of how colourful it is. What I like the most about it is the fact that the pieces are made as if they had been taken from a graphic novel. In fact, the illustrator Susana López help her with it. The collection is also full of irony and criticism to trends, aesthetics and forgery, although it is also very naive. 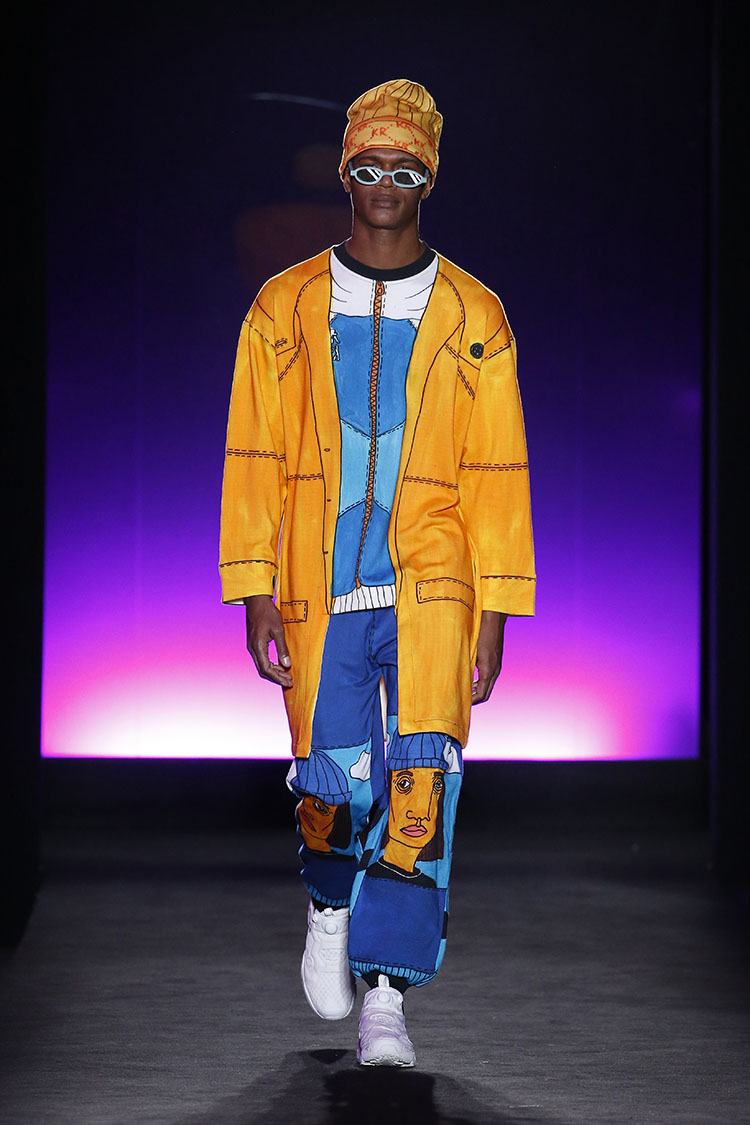 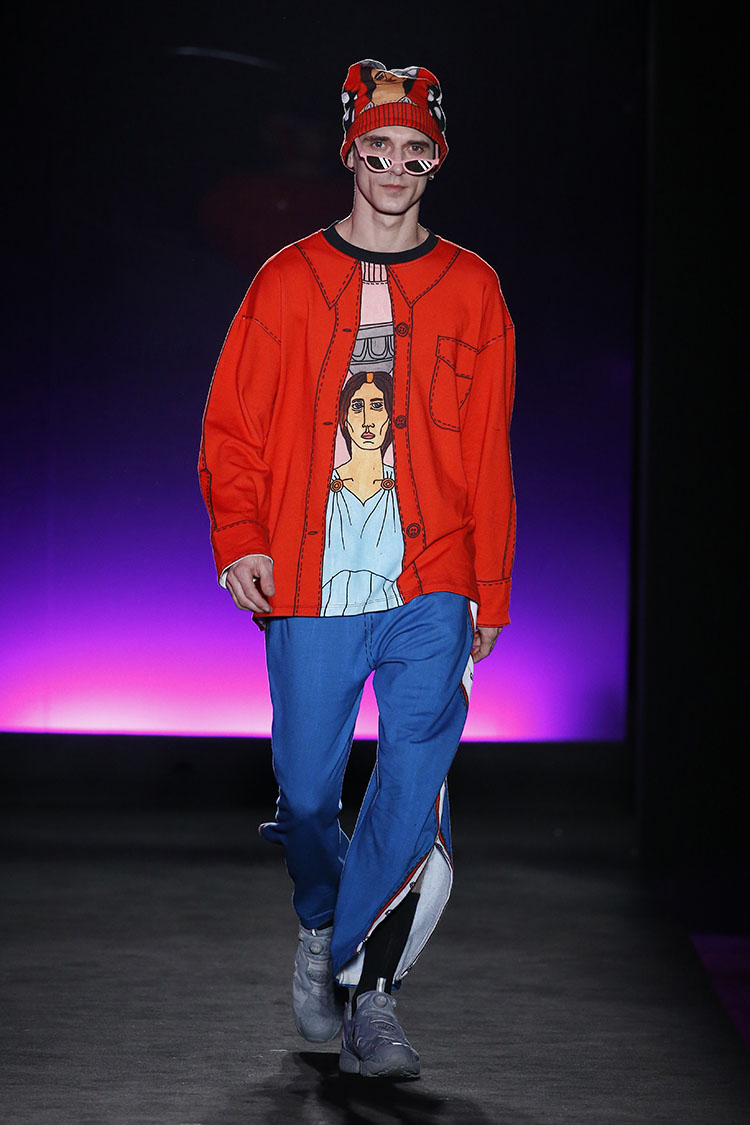 Right after Krizia Robustella’s show, Pablo Erroz presented his new collection Goals. It is the collection that completes his trilogy that also includes Panorama and Leave to Live. It is full of comfy oversized clothes that have no gender distinctions. He also mixes lots of different materials that we would not normally put together. This is probably one of the things that I like the most about it because it inspires me to experiment more with my clothing. To be honest, I think that what Pablo Erroz tried to show was his own vision of the future. His vision is very minimalist and inspired by the club culture. 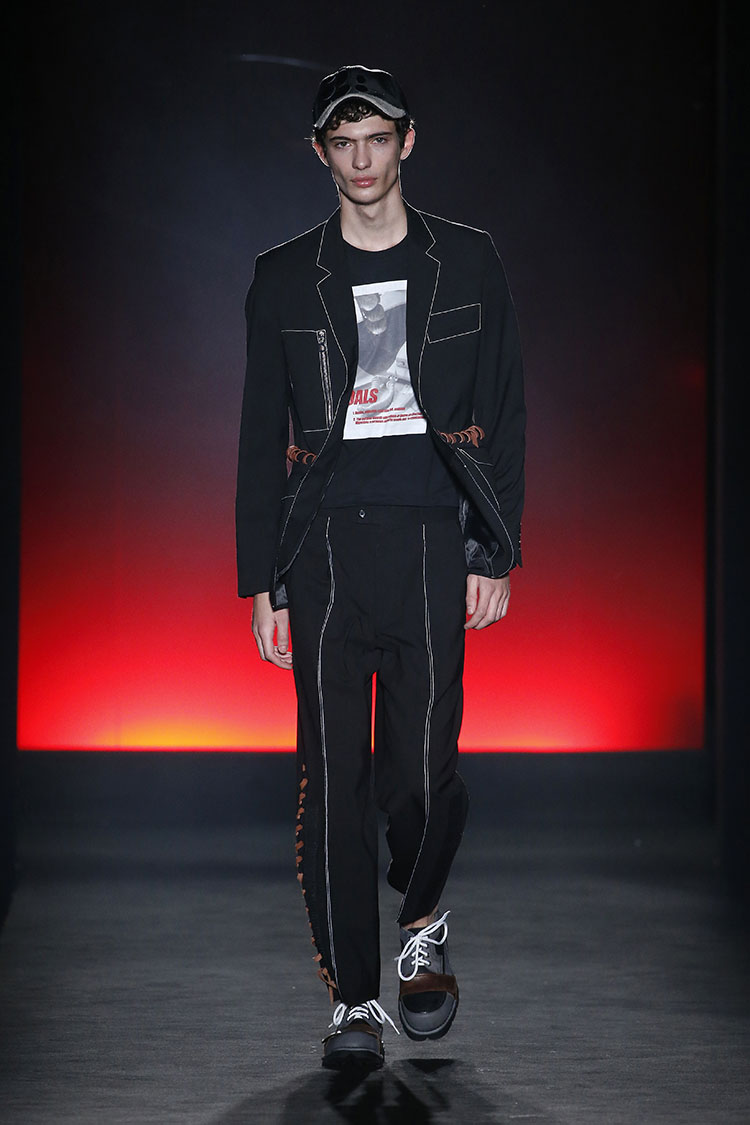 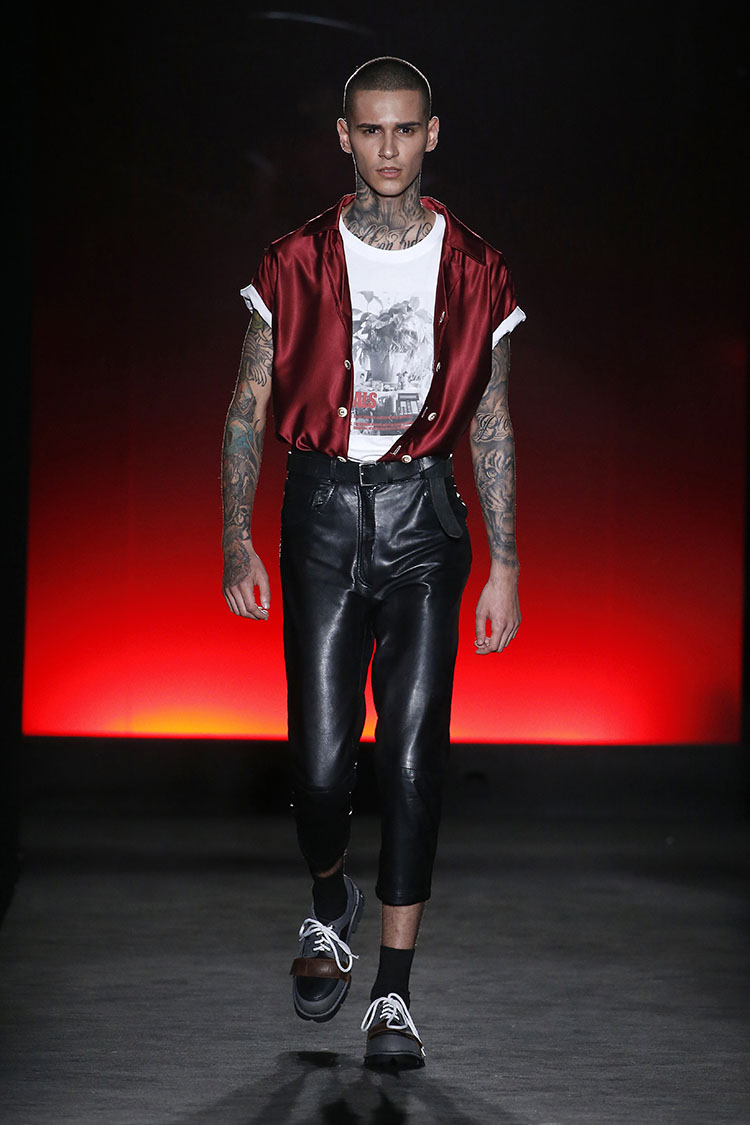 The first thing I noticed about Miquel Suay’s new collection was the amount of different patterns that he had used. It is surprising how some of them can look really good together. To be honest, I would have never styled them like that but the result was excellent. Again, it is not the kind of collection that I would wear because it has a baroque vibe. In fact, this is why he used so many different patterns. Another interesting thing about it are all the different colours he used. I know I have chosen the worst photos to show you this, but if you check the other looks you’ll see lots of other colours such as red and yellow. 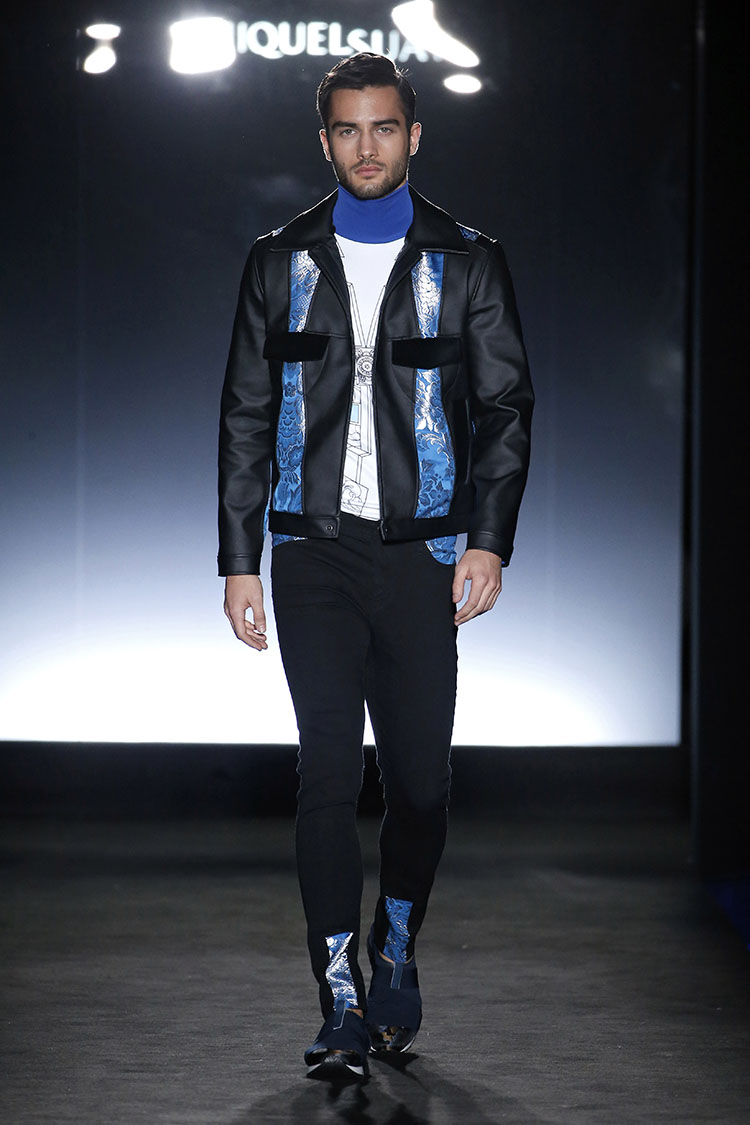 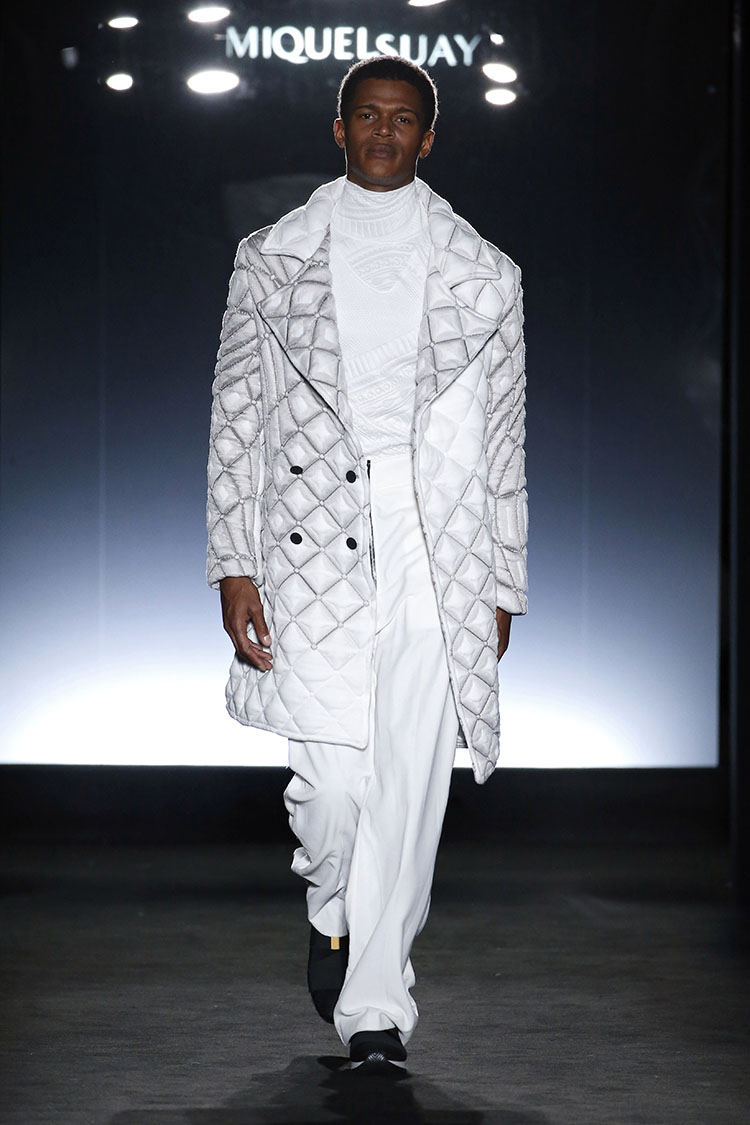 I hope you found this post interesting and that you discovered some new designers. These are only a few of the brands and artists that showcased their collections at 080 Barcelona Fashion. You should definitely check out the rest as well. I would love to know your opinion about their collections. Which is the one that you loved the most? Also, if you want to watch some videos from the ones I attended, you’ll find them in my highlights on Instagram (@zoelhl).

*All these images belong to 080 Barcelona Fashion, except for the featured image.